At age five I stood on stage before a classroom, imitating my mother teaching at the blackboard—and distracting her students. So she brought me to an unoccupied room. There I saw something so elegant, so noble, and as I pressed its keys I discovered I could express my emotions while I sounded out melodies. On returning, my mother locked the piano and told me to forget it and wait . . . . 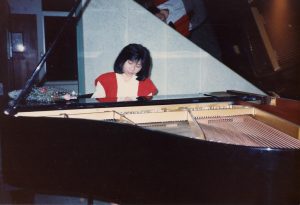 I will never forget my first piano lesson. My teacher sat next to me on my right, as my mother stood watching attentively over my left shoulder. In the middle of my playing, my teacher noticed that many of the piano’s keys were smeared with blood, so she stopped me. “What happened?” she asked. “This is only your first lesson.” I was surprised that neither she nor my mother had noticed sooner. I had my first taste of what it is to study piano . . . .

NOAN-HUEY (GINA) WU, a native of Taiwan, grew up in Lukang, a town near the Taiwan Strait that is famous for its culture and history. From the age of 3 she expressed interest in many things, including calligraphy; several of her works were displayed in the art galleries of a bank and a famous temple (Dragon Mountain Temple). Her musical passion was particularly nourished by her father’s love of playing music at a picnic spot at the seaside. During those moments, gazing out at the wide horizon, she sensed that her life would be like a ship on the ocean.

At 8 she began piano lessons, giving her first recital after six weeks of study. She greatly appreciates her first teacher, Ms. Shih, whose wise approach trained her to build a strong foundation that helped her conquer challenges she encountered later when studying on her own. After two and a half years of lessons she won her first competition award, taking a top prize in the Taiwan government’s national competition; she was the youngest contestant. She was then invited to perform solo and to provide accompaniment—often without a score, improvising harmonies on the spot—in more than 100 performances by age 14.

At age 12, because of her strong ability in math and physics, she taught the seventh grade class a couple of math lessons a week for a year at the teacher’s request. Thus she made a name for herself throughout the region for overturning the stereotype that girls are weak in math.

She entered Taipei Municipal Teachers College (currently Taipei Municipal University of Education) at 16, majoring in piano and voice, and minoring in violin and a Chinese instrument. In her last two years there, her piano teacher, Ms. Su-Chi Kuo, inspired her to share her unique talent through teaching, to which Miss Wu devoted more than 12 years in Taiwan and the U.S.A.

She chose to attend The Boston Conservatory on a scholarship and came to the U.S.A. in the fall of 1992; in May 1994 she received her Master’s degree in piano performance. She subsequently served on the piano faculty at a music conservatory in the U.S.A. for 6 years.  In 2000 the U.S. government awarded her a green card as an Artist of Extraordinary Ability (top level). Miss Wu has a wide repertoire that spans Bach to contemporary music; she performs each composer with a distinctly different style, touch and color, and her playing is characterized by a fully dimensional sound. She has given college master classes and has had numerous performances in Taiwan, the U.S.A. and Europe, on radio and television, in concerts with orchestra, in solo recitals, and with chamber ensembles. Miss Wu founded BACH & WU VITAL ARTS on March 21, 2006 (the anniversary of J.S. Bach’s birthday). She has lived in New York City since June 1994.

Q: Do you think classical music is suited for everybody?
Wu: Yes, of course. Classical music is not just for people who have studied it or for people who have specialized knowledge. When I visit piano showrooms to try the pianos, other customers gather around to listen—even kids—and people end up buying pianos that have sat unsold for a year or more. Even dogs listen to my playing! When I was teaching at Taipei Municipal School there was a dog who used to come into the classroom and listen. Well, one day when I was at home practicing, that dog appeared at my front door. The dog found my apartment by following my music. Also, one of my students brought her Pekinese dog (my favorite type) to lessons several times. The dog always listened.

Q: What are the goals of your company, BACH & WU VITAL ARTS?
Wu: The basic goal is to benefit humans. I have overcome a lot of difficulties in my life. I am a serious Buddhist, and when I was a teenager I made a promise to Guan-Yin Buddha that I would do my best to contribute to humanity. I believe music has healing properties—especially Bach’s music—so one of my goals is to donate some of my recordings to hospitals.

Q: You have studied on your own for a long time. How did that come about?
Wu: Yes, actually it is a long story. After I had been studying with my first teacher for about two years she said it was time for me to move on, and she recommended that I study with her teacher. But it would have been a much longer trip and twice as expensive. My parents were very busy and are frugal, so my mother requested that my teacher keep seeing me for lessons and just assign me new pieces. In this way, I started to learn how to use my own musical instincts and understanding to explore new music. And later whenever I transfered to other teachers the process was repeated and became a pattern.

Q: How did you come to the U.S.A.?
Wu: I had a dream as a teenager to go to Europe or the U.S., but because I was a girl my parents didn’t approve. Fortunately, I started saving money at 3 years old. I started teaching private students when I was 16, and when I was 21 I started teaching at Taipei Municipal School full time, plus I taught up to 30 private students each week. During that time I also won first prize at The Taipei Piano Competition. I saved enough to study in the U.S. and participate in international competitions. When I applied to schools in the U.S. I got several offers (from Juilliard, Northwestern, Boston . . .) so I finally came to the U.S.
( * I thank my mother for making up the full cost of my education in Boston in 1999. * )

Q: Did you study English in Taiwan?
Wu: Actually, I hardly had time to study, and I’m not so interested in languages. (I also thought that English is in the air in the U.S., so I could just absorb it.) But my strong will and clear goals helped me cut through difficulties. I finished the required courses for my Master’s degree in 3 semesters, and in the 4th semester I was a part-time student, only taking piano lessons (which saved me US$4,000 🙂 ).

Q: What is your weakness?
Wu: My biggest weakness is that I sleep too much, which has bothered my parents since I was a kid. Each day I only have a few hours awake, and that can cause misunderstandings with people since it makes it hard to socialize. It also makes me feel guilty that I’m not doing enough work. In 1994 my brother wrote me a letter saying that Albert Einstein slept 16 hours a day. My brother advised me not to be upset after waking up. I very much appreciate that Einstein saved my life. And guess what: a few years later, I found out that Einstein and I have the same birthday!

Q: Why do you play everyone except Haydn?
Wu: I am very impatient, and when I was a kid the only book I could finish reading was a biography of Beethoven. It made me very angry because I learned that Haydn, who was Beethoven’s teacher, attacked Beethoven because he was jealous of him. So I will never play Haydn’s music. But I do listen to it.

Q: Who is your favorite pianist?
Wu: I listen to anybody whenever I get a chance. It doesn’t matter if they are famous or not. I remember when I was in Teachers College, one of the piano teachers (not my teacher) always asked me who I listened to and who I thought was the best. After she had waited for me to think about it a long time, I finally spelled out “K-l-a-v-i-e-r.” She said, “No, that’s not it. Try thinking again.” I said “Yes, it is K-l-a-v-i-e-r.” Then she told me “That means ‘piano’ in German!”

Q: This is a personal question. Are you married?
Wu: No, I have never been married. And of course I have no children. (Because I’m not like Jesus’ mother Mary!) Some people call me Mrs. even after I have corrected them many times. I wonder if they wish I were married or wish I will never get married.